Not sure exactly what to title this blog.  The words Pulse, Reset, Tesla, and EMP are fairly common words in today's media. Until recently I don't think I had heard of Electromatic Pulse (EMP). This giant power surge is a real possibility and I feel led to warn and educate others with what basic information I've learned. Over the months these reports have resonated in my mind - I'll present them all together here - additional research can be done, of course, and you can draw your own conclusion or file it away for future reference.

Image credit:  Video - DO YOU FEEL THE PULSES?  https://twitter.com/facelikethesun

Recent news events may seem like separate accounts, yet the phrases, images, and words seem to tie together.  Back on May 1, 2016, at the massive fire at the Serbian Orthodox Church, St. Sava, in Manhattan, New York City, news reports displayed a Tesla statue in their courtyard. Nikola Tesla's father was an Orthodox priest.  Tesla's research led to the founding of the Tesla Electric Light & Manufacturing. Although the man Tesla was extraordinarily gifted and made remarkable strides in inventions and practical uses of energy, the car company that bears his name seems to be in the news for problems.

Power lines in the news...

A Google Doodle released in 2015 in commemoration of Sally Ride as the first American woman to travel into space on June 18, 1983. The video had among other interesting images this one with a power line in the scene. 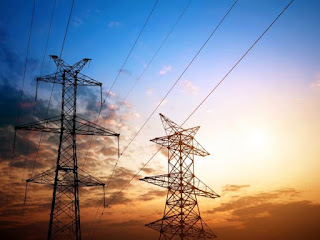 On June 20, 2016, this video from Niagara Falls, NY, went viral (another child/power line reference). This cell phone video from the scene by a viewer shows a bounce house sailing through the air before landing on power lines. Luckily, no children were inside when it was lifted off the ground by a gust of wind. National Grid sent two crews to the scene to cut the power and work on getting the bounce house down off those high tension wires. A spokesman said they cut the power temporarily for the safety of the workers. 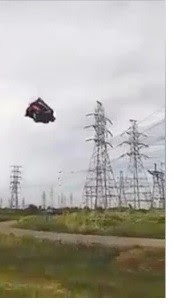 An article from 2010:
Electromagnetic pulse impact far and wide – USA TODAY - Posted 10/26/2010 - Updated 10/27/2010  http://usatoday30.usatoday.com/tech/science/2010-10-26-emp_N.htm
Modern society relies on technologies vulnerable to electromagnetic pulse effects that, if strong enough, can induce currents that burn out wires and circuits. One EMP burst and the world goes dark.

So we are not caught unaware, the Bible warns us to expect "the unexpected."

1 Thessalonians 5:3 (KJV)
For when they shall say, Peace and safety; then sudden destruction cometh upon them, as travail upon a woman with child; and they shall not escape.

Jeremiah 4:20 (KJV)
Destruction upon destruction is cried; for the whole land is spoiled: suddenly are my tents spoiled, and my curtains in a moment.

There is much more that could be written about this subject and I am not qualified, I am merely sharing the things that I have found that seem to connect.  Here are more links to explore:

Warning Signs in America: PROPHETIC EVENTS AROUND THE WORLD 2016
https://www.youtube.com/watch?v=GxXxvJYUpxk

Jason A Prophecy - THE WORLD IN 2017 - End of America
https://www.youtube.com/watch?v=cTJMRDtt0E0

This news can be scary and frightening -
yet a shelter has been provided in our Savior, Jesus Christ.

Another incident in the news with power lines - balloon accident - 16 killed ;-( http://www.chron.com/news/houston-texas/article/Friends-post-tributes-to-victims-of-hot-air-8854687.php