And without controversy great is the mystery of godliness:
God was manifest in the flesh, justified in the Spirit,
seen of angels, preached unto the Gentiles,
believed on in the world, received up into glory.
1 Timothy 3:16 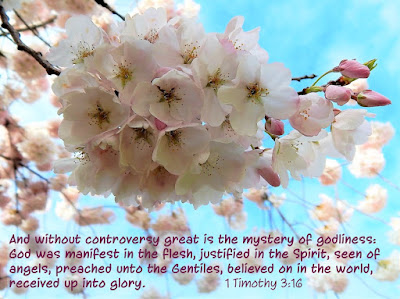 April 18 - Now the crescent Moon hangs close to Aldebaran at dusk, cradled in the Hyades
http://www.skyandtelescope.com/observing/this-weeks-sky-at-a-glance-april-13-21/
April 24 - The waxing gibbous Moon shines near Regulus (Leo) this evening.
April 26 & 27 - Venus shines between Aldebaran and the Pleiades in late twilight
http://www.skyandtelescope.com/observing/this-weeks-sky-at-a-glance-april-20-28/

… and when He had given thanks, He broke it and said, “This is My body, which is for you; do this in remembrance of Me.” In the same way, after supper He took the cup, saying, “This cup is the new covenant in My blood; do this, as often as you drink it, in remembrance of Me.” For as often as you eat this bread and drink this cup, you proclaim the Lord’s death until He comes.…
1 Corinthians 11:24-26 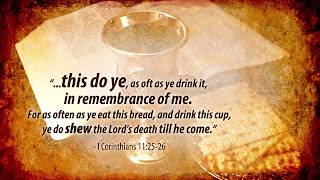 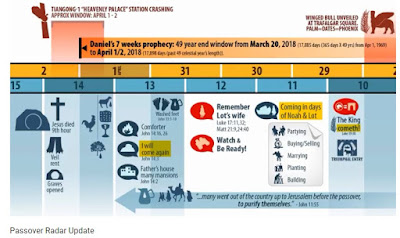 ** Passover week / Days of Unleavened Bread **
April 1 / Nisan 14 - Lamb sacrificed / Christ's death
On this special remembrance day, let us observe the memorial of the Lamb being offered to bear the sin of many. This is the day that those events took place; and as we rehearse the sacrifice of His body and blood, let us live in light of Him appearing a soon second time.VIDEO: https://youtu.be/ZstY6AB2-7s
Exodus 12:22; Hebrews 9:24-28; Luke 12:34-40

From Jerusalem, the “holy fire” is distributed to several Orthodox Christian countries, including Bulgaria. Special flights convey the flame to ensure that it arrives in time for late-night liturgies on the eve of Easter Sunday. https://sofiaglobe.com/2018/04/07/orthodox-easter-2018-holy-fire-appears-at-church-of-the-holy-sepulchre-in-jerusalem/
April 8 - Orthodox Easter (Julian calendar) 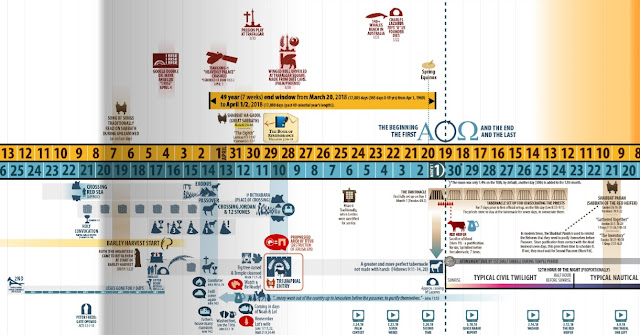 
Go Forward
When the Hebrew people were led out of Egypt, they came to a point where they felt they were at the end of the road, and that they had been led in the wrong direction. Yet, it was at that moment, the Lord gave the simple instruction: Go Forward. He had promised them, several days prior, that He would lead them out of the land of Egypt, and that one day they would commemorate it. Likewise, we are at a parallel time, where we study the context of Christ's first time, and see the incredible Exodus framework that He used. The Lord has led us to this place - this time of expected redemption. Let us remember Him till He comes, and let us "Go forward" - out to meet our Beloved. Maranatha!

April 16 – Pope Benedict’s 91th birthday
April 16-21 - Vatican trains exorcists as demonic possession claims rise
ROME - With reported demonic possessions on the rise in Italy, the Vatican is hosting a week-long training to better prepare exorcists for ministry. Catholic leaders have said that the country needs more exorcists, and better training.
“Today we are at a stage crucial in history: Many Christians no longer believe in [the devil’s] existence, few exorcists are appointed and there are no more young priests willing to learn,” said one of the event’s speakers, exorcist Father Cesare Truqui, according to Vatican News.
An exorcism course will be held at the Pontifical Athenaeum Regina Apostolorum in Rome from April 16-21. The training will focus on exorcism and the prayer of liberation, a prayer commonly used for deliverance from possession.
https://cruxnow.com/vatican/2018/03/01/vatican-trains-exorcists-demonic-possession-claims-rise/
Some of the important questions he asks are how long the person has been afflicted and if he or she has dabbled in practices such as tarot card reading, black magic, white magic or “cleansing.” Even yoga, “used for purposes other than the purpose of exercise,” can be an open door to an evil spirit, he said.
“These are all pagan and all against the First Commandment,” Thomas said. “You cannot be a witch or a wiccan and be a Roman Catholic.”
https://cruxnow.com/church-in-the-usa/2017/10/25/priest-says-exorcism-ministry-healing-helps-suffering-people/
Demand for exorcisms is up threefold in Italy, so Vatican is holding conference
Four years ago, the Vatican backed the International Association of Exorcists, which was founded in 1990 and has licensed some 200 members on six continents.
https://www.usatoday.com/story/news/world/2018/02/23/vatican-host-international-exorcism-conference-meet-growing-demand/367735002/ 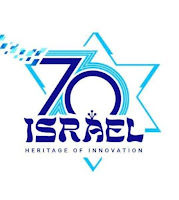 - https://en.wikipedia.org/wiki/Independence_Day_(Israel)
April 18 - Israel’s Independence Day will begin with a torch-lighting ceremony the evening of Wednesday, April 18, and continue through Shabbat.
April 19 – (Hebrew calendar) 70th Anniversary of Israel -
Events over the three days will include: “Israel and the world sing together,” in which Israelis and Diaspora Jews will sing simultaneously; a fireworks show; a “70-km. party” that will rave across the country from Tiberias to Eilat; and a “Parade of Lights” planned for Thursday night, illustrating Israel’s success and innovation.
A pre-Shabbat “70th Hora” will be held at 4pm on Friday, with Israelis folk-dancing in group circles. The closing ceremony on Saturday night will be a “soundtrack event for Israeli society,” honoring dignitaries both living and dead. The overall theme for Israel’s 70th is “Heritage of Innovation,” drawing upon Israel’s successes as the Start-Up Nation and the cutting-edge technology developed locally.
http://www.jpost.com/Israel-News/Culture-Ministry-announces-plans-for-Israels-70th-anniversary-536822

New York subway station brings back David Bowie
The underground exhibit will be live until May 13  - https://youtu.be/nkrER77zdUg
http://www.adweek.com/creativity/spotify-turned-a-subway-station-into-an-interactive-homage-to-david-bowie/

April 24-30 - World Immunization Week [WHO]
April 26 - Alien Day (Aliens movie)
April 27 - Ancient Aliens Season return
April 27 - US Release Disney/Marvel’s Avengers: Infinity War means the sequel is officially less than two months away. The pic’s release has been moved up a week to April 27, as told in an amusing back-and-forth between Marvel Studios and Robert Downey Jr. today:
http://deadline.com/2018/03/marvel-jumpstarts-summer-in-late-april-as-avengers-infinity-war-moves-up-1202307346/
https://youtu.be/mBeOUjf-NLA
Starring: Chris Evans, Chris Pratt, Chris Hemsworth
Directed By: Anthony Russo, Joe Russo
Synopsis: The Avengers and their allies must be willing to sacrifice all in an attempt to defeat the powerful Thanos before his blitz of devastation and ruin puts an end to the universe.
-       Disney Announces 26 New Release Dates, Including Marvel Films Through 2022
http://www.slashfilm.com/marvel-release-dates/

April 31/May 1 - 2nd Passover (Numbers 9:6-14, 2 Chronicles 29:1-27)
For those who fail to keep Passover at the appointed time in Month 1, the Scripture provides for a second Passover and Unleavened Bread observance that starts today.

After this I looked and saw a multitude too large to count, from every nation and tribe and people and tongue, standing before the throne and before the Lamb. They were clothed in white robes, with palm branches in their hands. And they cried out in a loud voice:
“Salvation to our God, who sits on the throne, and to the Lamb!”
Revelation 7:9-10 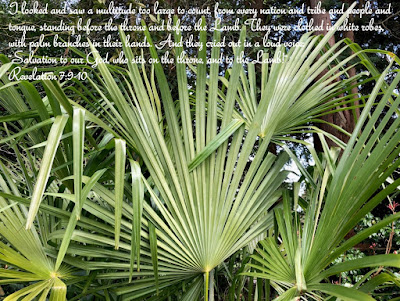 … as we await the blessed hope and glorious appearance
of our great God and Savior,
Jesus Christ. He gave Himself for us to redeem us from all lawlessness
and to purify for Himself
a people for His own possession, zealous for good deeds.
Speak these things as you encourage and rebuke with all authority. Let no one despise you.… 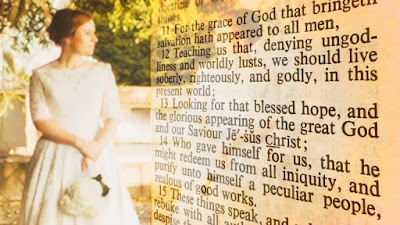 And the Lord their God shall save them in that day as the flock of his people:
for they shall be as the stones of a crown, lifted up as an ensign upon his land.
Zechariah 9:16