The heavens declare the glory of God,
the skies proclaim the work of His hands. 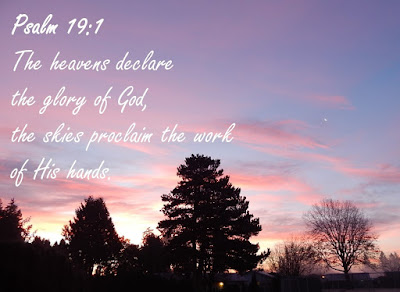 All photos in this blog were taken on the morning of 1-1-19.

Winter Circle - Planetary Alignment
Fomalhaut is nearby too!  Stellarium image
More about Aldebaran and Fomalhaut

Venus will be well placed for observation in the dawn sky, shining brightly at mag -4.4.

Isaiah 30:25-27 - https://biblehub.com/isaiah/30-26.htm
God's Mercies
…25And from every high mountain and every raised hill, streams of water will flow in the day of great slaughter, when the towers fall. 26The light of the moon will be as bright as the sun, and the light of the sun will be seven times brighter— like the light of seven days— on the day that the LORD binds up the brokenness of His people and heals the wounds He inflicted. 27Behold, the Name of the LORD comes from afar, with burning anger and dense smoke. His lips are full of fury, and His tongue is like a consuming fire.… 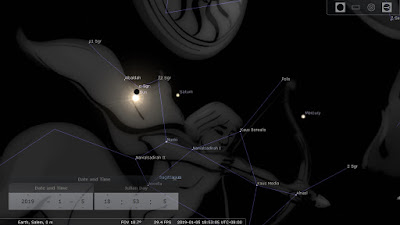 Jan 14 - Closest extent Jupiter will return (to Antares) Once in Retrograde
https://drive.google.com/file/d/0B4lMw4yuCqaBb052QWx5TDVEbVE/view
https://tammyjdub.blogspot.com/2018/11/antares-rival-of-mars-wounding.html 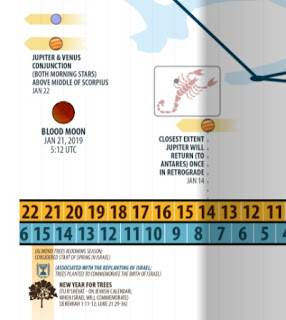 Jan 20/21 - Total Lunar Eclipse
Extremely Rare! - Jan. 21st - It's a SUPER Blood Red Moon on Tu B'Shevat
https://youtu.be/DpS5AhpxoNg
https://www.breakingisraelnews.com/119211/prophecy-trump-cyrus-blood-moons/
January 2019 lunar eclipse: How to watch the super blood wolf moon eclipse
Starting on Sunday, Jan. 20, a total lunar eclipse, or blood moon, that coincides with a supermoon will be visible over the entire United States.
Technically, it could be called a super blood wolf moon eclipse.
The next total lunar eclipse happens on May 26, 2021
https://www.kgw.com/article/news/nation-world/january-2019-lunar-eclipse-how-to-watch-the-super-blood-wolf-moon-eclipse/507-624837225?ref=exit-recirc
https://www.almanac.com/content/night-sky-january-2019

We are at a time where even the world is looking up at celestial signs, the Blood Moon, and admiring the two Morning Stars coming together. Yet, when we look up, does it remind us of the time, prophecy, Christ's promises, the next chapter, or that we should shine bright for our Father? The heavens are drawing specific attention to celestial pictures that the book of Revelation finishes with. Has it caught our attention and focus - what promise those pictures are connected with?

Jan 22 - Venus-Jupiter conjunction - TWO MORNING STARS!
- https://earthsky.org/?p=296766
See timeline below - a conjunction of EVENTS as well!!
Beautiful description in this video  and this one too: Blood Moon video 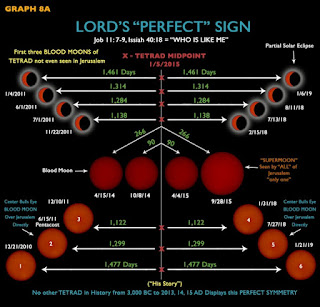 Thursday, January 31
AM - Moon and Venus (Morning star) near Jupiter in Scorpio at the Golden Gate
PM - "Leo announces spring," goes an old saying. Actually, Leo showing up in the evening announces the cold, messy back half of winter. Come spring, Leo will already be high.
https://www.skyandtelescope.com/observing/this-weeks-sky-at-a-glance-january-25-february-2/

...a light shining in a dark place
until the day dawns and the morning star rises in your hearts. 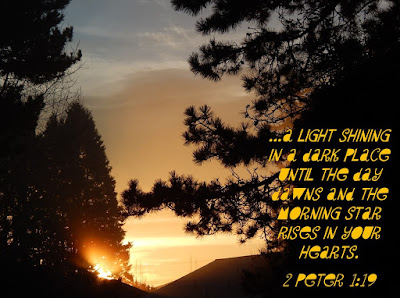 Be sober, be vigilant; because your adversary the devil, as a roaring lion, walketh about, seeking whom he may devour: 1 Peter 5:8-9

Keys to Biblical Understanding - TIME
Time is part of Creation; it has properties and laws of nature that it follows. As part of the natural world, those properties can be changed - if God allows it. This principle is important in seeing how this was done in the past, and how it will play a part in prophecy, particular near events. We also see amazing connections with time and the celestial clock, being rehearsed right now.  Maranatha!﻿
https://tammyjdub.blogspot.com/2016/10/journey-of-time.html

January is "named for the Roman god Janus, protector of gates and doorways.
Depicted with two faces, one looking into the past, the other into the future."
Head of Janus, Vatican museum, Rome
From Ianus derived ianua ("door"), and hence the English word "janitor" (Latin, ianitor).
https://en.wikipedia.org/wiki/Janus

Jan 1 - World Day of Peace is a feast day of the Roman Catholic Church dedicated to universal peace, held on 1 January, the Solemnity of Mary, Mother of God. Pope Paul VI established it in 1967, being inspired by the encyclical Pacem in Terris of Pope John XXIII and with reference to his own encyclical Populorum Progressio. The day was first observed on 1 January 1968
http://www.usccb.org/issues-and-action/human-life-and-dignity/war-and-peace/world-day-of-peace.cfm
https://en.m.wikipedia.org/wiki/World_Day_of_Peace
https://w2.vatican.va/content/francesco/en/messages/peace.index.html
2019 message: https://w2.vatican.va/content/francesco/en/messages/peace/documents/papa-francesco_20181208_messaggio-52giornatamondiale-pace2019.html

In England and Wales, "Peace Sunday" is traditionally observed on the Second Sunday of Ordinary Time, which is the Sunday occurring between 14 and 20 January, inclusive.

Jan 4 - Escape Room movie premiere - Cubes / clues / Six strangers find themselves in circumstances beyond their control, and must use their wits to survive.

1 Corinthians 10:13
There hath no temptation taken you but such as is common to man: but God is faithful, who will not suffer you to be tempted above that ye are able; but will with the temptation also make a way to escape, that ye may be able to bear it.
2 Kings 19:30-31
And the remnant that is escaped of the house of Judah shall yet again take root downward, and bear fruit upward.
Ezra 9:8
And now for a little space grace hath been shewed from the Lord our God, to leave us a remnant to escape, and to give us a nail in his holy place, that our God may lighten our eyes, and give us a little reviving in our bondage.


But now, for a brief moment, grace has come from the LORD our God to preserve for us a remnant and to give us a stake in His holy place. Even in our bondage, our God has given us new life and light to our eyes.


Deliver me in thy righteousness, and cause me to escape: incline thine ear unto me, and save me.

Jan 4/5 - Today the Parashah is Va-Era which means "And I Appeared."
Today is Shabbat Mevarekhin which means "Sabbath of Blessing."
It is the last Sabbath before the New Moon.
Parashah #14 Scripture Readings Va-Era (And I Appeared)
Torah Exodus 6:2-9:35 - God Promises Deliverance
I have heard the groaning of the Israelites, whom the Egyptians are enslaving,
and I have remembered My covenant.
Haftarahs Ezekiel 28:25-29:21
25 Thus saith the Lord God; When I shall have gathered the house of Israel from the people among whom they are scattered, and shall be sanctified in them in the sight of the heathen, then shall they dwell in their land that I have given to my servant Jacob.
26 And they shall dwell safely therein, and shall build houses, and plant vineyards; yea, they shall dwell with confidence, when I have executed judgments upon all those that despise them round about them; and they shall know that I am the Lord their God. / The Judgment Against Pharaoh


January 9, 2019 - GLOBAL DAY OF PRAYER AND FASTING- 1-9-19
https://momsinprayer.org/events/global-day-of-prayer-and-fasting-2
1 Peter 5:6–7 - Humble yourselves under the mighty hand of God so that at the proper time he may exalt you, casting all your anxieties on him, because he cares for you.
Luke 18:15-17  - And they brought unto him also infants, that he would touch them: but when his disciples saw it, they rebuked them. But Jesus called them unto him, and said, Suffer little children to come unto me, and forbid them not: for of such is the kingdom of God. Verily I say unto you, Whosoever shall not receive the kingdom of God as a little child shall in no wise enter therein.
3 John 1:4
I have no greater joy than to hear that my children walk in truth.
Resource for parents/grandparents:
https://drive.google.com/file/d/1JoRZLPwFUUyBxxg6k3RDzapf-Xi8uqwb/view 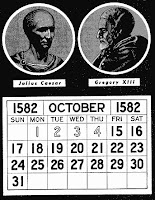 Jan 20/21 – Full Moon / Lunar Eclipse / Blood Moon (see Celestial Signs above)
The holiday of Tu B’shvat, the 15th day of the Hebrew month of Shvat, begins at sundown on the same day. Known as the new year of the trees, Tu B’Shvat is one of four “New Years” mentioned in the Mishnah (the oral law).
https://www.breakingisraelnews.com/119523/rabbinic-expert-first-super-blood-moon-of-the-year-sign-of-earthquakes-governments-will-fall
Extremely Rare! - Jan. 21st - It's a SUPER Blood Red Moon on Tu B'Shevat
https://youtu.be/DpS5AhpxoNg
https://www.breakingisraelnews.com/119211/prophecy-trump-cyrus-blood-moons/

Joel 2:31 The sun shall be turned into darkness, and the moon into blood, before the great and terrible day of the Lord come.

Acts 2:20 The sun shall be turned into darkness, and the moon into blood, before the great and notable day of the Lord come:

Revelation 6:12 And I beheld when he had opened the sixth seal, and, lo, there was a great earthquake; and the sun became black as sackcloth of hair, and the moon became as blood;

Genesis 1:11 - First mention of trees in the bible.
The Bible mentions by name TWO trees that were planted in the Garden of Eden:
“The tree of life was in the midst of the garden, and the tree of the knowledge of good and evil.” Genesis 2:9 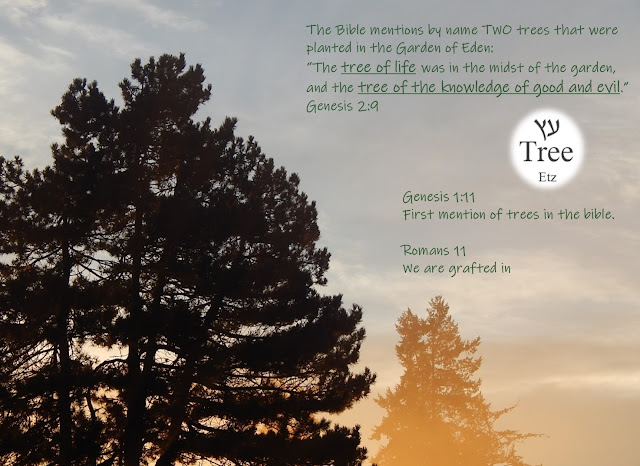 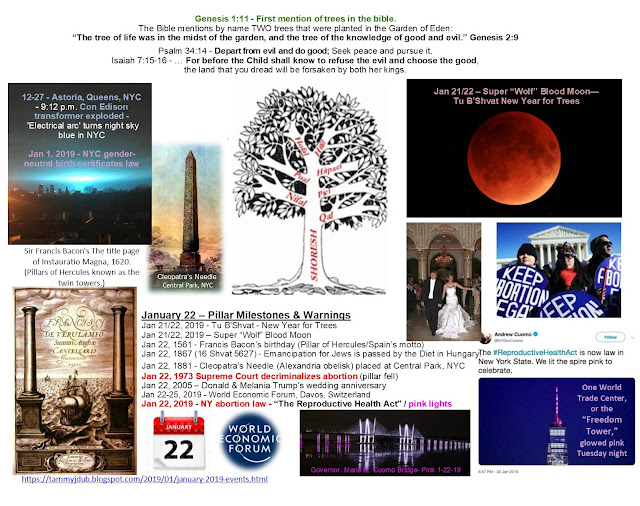 Jan 22 - NY abortion law - “The Reproductive Health Act"  (applause at passing)
Celebration with pink lights on NYC landmarks
The New York Senate passed a radical pro-abortion bill Tuesday that would allow unborn babies to be aborted for basically any reason up to birth. The vote was 38-24. [11-6]
https://www.lifenews.com/2019/01/22/new-york-senate-passes-bill-legalizing-abortions-up-to-birth
Isaiah 5:20 Woe unto them that call evil good, and good evil; that put darkness for light, and light for darkness; that put bitter for sweet, and sweet for bitter!New York 'celebrates' legalizing abortion until birthOh, Lord, come!!‘A Sad and Evil Day’: New York Legalizes Abortion Up to Baby’s Birth Day on Anniversary of Roe v. Wade. New York State Senate Cheers After it Passes Up-to-Birth Abortion Law. One World Trade Center lit pink in celebration of New York abortion law. “The Reproductive Health Act is a historic victory for New Yorkers and for our progressive values,” the governor said in a statement. “I am directing that New York’s landmarks be lit in pink to celebrate this achievement and shine a bright light forward for the rest of the nation to follow.” https://www.washingtontimes.com/news/2019/jan/23/one-world-trade-center-lit-pink-celebration-new-yo/
It was one thing for state leaders to carry out their threat against the unborn, and another thing altogether to revel in it -- cheering wildly as Governor Andrew Cuomo (D) signed the warrant for the execution of more innocents. In a state where the womb was already the most dangerous place for a child, this law begins a new era. Open season on our own. From now on, nothing stands in the way of a woman taking her baby's life -- days, hours, or even a minute before she's born. A fully grown, healthy human baby that thousands of struggling couples would give anything to have.
That's the savagery New York leaders call "progress." That's the "achievement" Cuomo turned into a pink beacon, shining "a bright light forward for the rest of the nation to follow." https://www.frc.org/updatearticle/20190124/empire-state
The reality of what New York has just done is starting to settle over the country like an uneasy fog. For Americans, even in states miles away, the horror of it all feels personal. In one dark night, lit only by a pink pointer in the sky, we all had a moment to lament what New York has become and what all of America would look like under the policies of liberals like Governor Andrew Cuomo. https://www.frc.org/updatearticle/20190125/status-cuomo 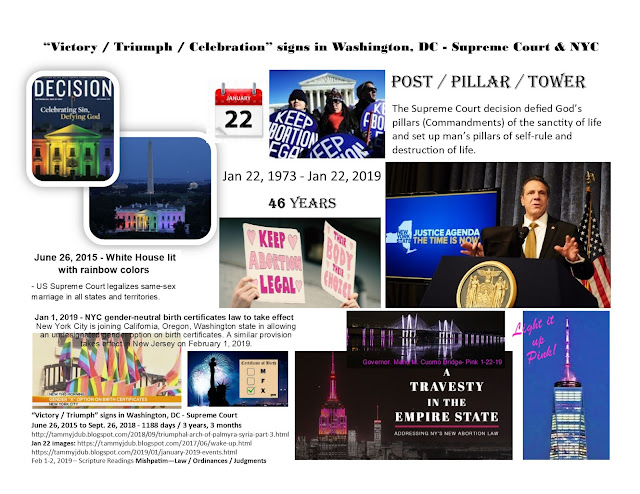 January 27 - International Holocaust Remembrance Day
70th anniversary of the Universal Declaration of Human Rights and the Convention on the Prevention and Punishment of the Crime of Genocide.
- https://en.wikipedia.org/wiki/International_Holocaust_Remembrance_Day
https://www.un.org/en/holocaustremembrance/2019/calendar2019.html

Jan 29 - IYPT2019 Opening Ceremony of the 150th anniversary of the creation of the Periodic Table by Russian scientist Dmitry Ivanovich Mendeleev, the UN has launched a yearlong initiative to raise awareness of chemistry and its applications for sustainable development.
https://news.un.org/en/story/2019/01/1031532

...Jesus came and stood among them.
“Peace be with you!” 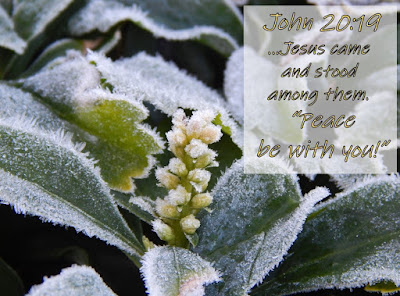