And ye shall know the truth,

and the truth shall make you free. This is a brief overview:

First mention of 50 / Fifty in the Bible:

Genesis 6:15 - And this is the fashion which thou shalt make it of: The length of the ark shall be three hundred cubits, the breadth of it fifty cubits, and the height of it thirty cubits.
Nun  נ  ן
Each month is linked to a letter of the Hebrew alphabet. Cheshvan is linked to the letter nun.
The numeric value of the letter nun is 50. In Scripture, the number 50 is associated with the Jubilee, or year of redemption, and denotes fullness or completion. 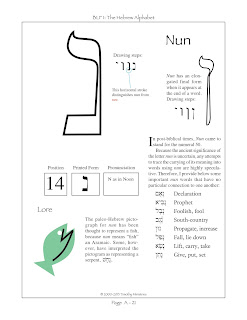 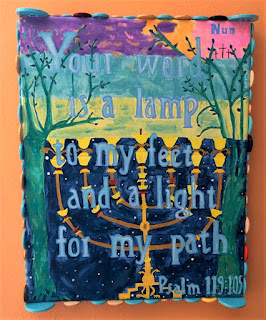 Leviticus 23:16 - Even unto the morrow after the seventh sabbath shall ye number fifty days; and ye shall offer a new meat offering unto the Lord.

Pentecost - 4005 pentēkostḗ (from 4002 /pénte, "five") – properly fiftieth, referring to the festival of Pentecost – a one day festival celebrated at the end of the barley harvest. This was a joyous time of giving great thanks to God.
[The workers could only spare one day at this season of the year because the wheat harvest was already in process.]

The Jubilee (Hebrew: יובל yovel) year (every 50th year) and the Sabbatical year (every seventh year) are Biblical commandments concerning ownership of land and slaves.

Yovel, Shofar and Freedom
"...on Yom-Kippur, you are to sound a blast on the shofar; you are to sound the shofar all through your land; and you are to consecrate the fiftieth year, proclaiming freedom throughout the land to all its inhabitants. It will be a yovel for you;" Leviticus 25:9.10 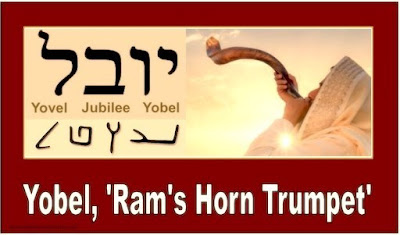 
In the biblical cycle, 50 is the yovel (jubilee) year, in which debts are released, slaves go free, the shofar of liberation is sounded, and each person returns to his or her family’s holdings.
The year 2017/5777 marked 50 years since the Six-Day War, when Israel captured East Jerusalem, the West Bank, and Gaza.
https://www.truah.org/campaign/yovel-fifty-years-of-occupation
https://www.chabad.org/library/article_cdo/aid/513212/jewish/When-Is-the-Next-Jubilee-Year.htm

A 50th Anniversary is known as a GOLDEN ANNIVERSARY

The Meaning of Numbers: The Number 50

Fifty can be found 154 times in the Bible. Its meaning is directly related to the coming of God's Holy Spirit.
After Jesus appeared to Mary Magdalene on Sunday morning, April 9 in 30 A.D., he ascended to the Father in heaven (John 20:17). His ascension, as a type of firstfruit from the dead (Revelation 1:5), occurred on the day God told the Israelites they were to wave a sheaf composed of the firstfruits of their harvest (Leviticus 23:9 - 11). It is on this day that the count of 50 days to the Feast of Pentecost begins.
In the New Testament the word Pentecost comes from the Greek word for fiftieth (Strong's Concordance #G4005). Also known as the Feast of Weeks or Firstfruits, it was on this special Holy Day that God first poured his Holy Spirit upon about 120 believers who had gathered to keep the day (Acts 1:15, 2). They became the firstfruits of God's spiritual harvest of humans.
How is the number 50 related to deliverance?
Fifty also symbolizes deliverance or freedom from a burden. God commanded ancient Israel that every 50th year, on the Day of Atonement, that a Jubilee was to be declared with the sound of a trumpet (Leviticus 25).
During the Jubilee year all debts were settled in favor of the debtor and inheritances were returned to their rightful owners. Also, those who worked as slave laborers in order to repay a debt were granted their freedom to return home to their families and land.
Excerpts from: https://www.biblestudy.org/bibleref/meaning-of-numbers-in-bible/50.html 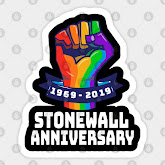 1969 (MCMLXIX) was a common year starting on Wednesday of the Gregorian calendar, the 1969th year of the Common Era (CE) and Anno Domini (AD) designations, the 969th year of the 2nd millennium, the 69th year of the 20th century, and the 10th and last year of the 1960s decade. The year is associated with the first manned landing on the Moon (Apollo 11), the creation of the internet, and the commencement of the LGBT Rights Movement.
https://en.wikipedia.org/wiki/1969:_The_Year_Everything_Changed

August especially seems to be filled events that have meaning to the number 50 and setting captives free.
August Events (more details)  - http://tammyjdub.blogspot.com/2019/08/august-events-2019.html 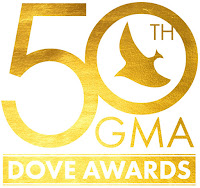 Oct 15, 2019 - Dove Awards - 50th Anniversary - https://doveawards.com/
Delayed broadcast aired on TBN on Sunday, October 20, 2019
https://doveawards.com/tobymac-hillsong-worship-and-kirk-franklin-set-to-perform-at-50th-annual-gma-dove-awards/ - Hillsong ;-(  Christian in name only. Use biblical discernment.
The Dove Awards @GMADoveAwards ·
Oct 24 - (1/2) On the heels of our great community celebration at the 50th Dove Awards, we now mourn as a community. This week, 2 of our artists have gone through the unthinkable and lost their children.
https://twitter.com/GMADoveAwards/status/1187493602403987456  - Next year 10-20-20

Behold, I send you forth as sheep in the midst of wolves:
be ye therefore wise as serpents,
and harmless as doves.

Pure religion and undefiled before God and the Father is this,
To visit the fatherless and widows in their affliction,
and to keep himself unspotted from the world.

Sesame Street Is 50 And The Empire State Building Will Go Green & Yellow
The most important television show in the world, Sesame Street, is celebrating its 50th anniversary on Sunday, November 10th, and naturally, New York City must acknowledge it. This comes six months after it was officially declared that Sesame Street is in Manhattan—West 63rd and Broadway, to be exact.
https://gothamist.com/arts-entertainment/sesame-street-50-and-empire-state-building-will-go-green-yellow
https://en.wikipedia.org/wiki/Sesame_Street

Caroll Spinney, legendary Sesame Street puppeteer of Big Bird, dies at 85
12-9-19 - 50 years / 1969 - Spinney died at his home in Connecticut on Sunday after living with dystonia, a neurological movement disorder, for several years.  He died at his home in Connecticut, according to a press release from Sesame Workshop. Spinney had worked on the beloved cartoon show for 50 years, serving as the puppeteer for Big Bird and Oscar the Grouch since the show's premiere in 1969.
https://www.nbcnews.com/pop-culture/pop-culture-news/caroll-spinney-legendary-sesame-street-puppeteer-big-bird-dies-85-n1097806


It’s been 50 years since a rainbow snake has been seen in one Florida county.
A woman in Florida had a once-in-a-lifetime experience when she encountered a rainbow snake. The rare, shy snake has not been seen in the wild since 1969 and many experts believed it was extinct.  FWC Fish and Wildlife Research Institute - February 19, 2020 at 6:49 AM
https://goodlivingguide.com/rainbow-snake - https://www.sun-sentinel.com/news/florida/fl-ne-rainbow-snake-florida-20200226-ffxswz6bezct5cnnyr5vhqwgg4-story.html

He has shown you, O mankind, what is good.
And what does the LORD require of you but to act justly, to love mercy,
and to walk humbly with your God? 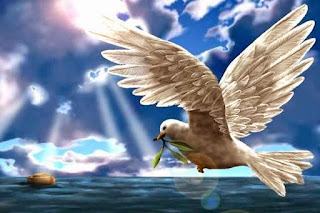 Celebrate 50 years of fight against illicit trafficking of Cultural Property
In 2020, the 1970 Convention on the Means of Prohibiting and Preventing the Illicit Import, Export and Transfer of Ownership of Cultural Property celebrates its 50th anniversary
Adopted by the General Conference of UNESCO on 14 November 1970, this Convention provides an international framework for the prevention of theft and looting and the return and return of stolen cultural property, in parallel with other advances in the fight against illicit trafficking.
https://en.unesco.org/news/celebrate-50-years-fight-against-illicit-trafficking-0
https://en.unesco.org/fighttrafficking/1970 - June 22, 2020 - https://en.unesco.org/fighttrafficking
Somber commemorations ~
50th - 1969 a pivotal time! Rebellion of Law and Order!
1969: The Year Everything Changed * Abortion * Apollo * WWW * LGBT * Woodstock * Chicago/NYC/SF
1969 – Oregon became one of the first states to legalize abortion. https://www.ortl.org/the-facts/oregons-history 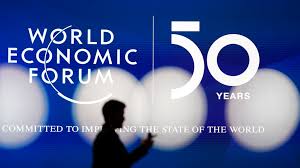 WEF 50th anniversary highlighted at January 2020 Forum
At the age of 50, is Davos going through a midlife crisis?
https://www.weforum.org/agenda/2020/02/is-davos-going-through-a-midlife-crisis
https://www.shutterstock.com/editorial/image-editorial/50th-annual-meeting-of-world-economic-forum-in-davos-cologny-switzerland-14-jan-2020-10525401b
The World Economic Forum (WEF), based in Cologny-Geneva, Switzerland, is an NGO, founded in 1971. The WEF's mission is cited as "committed to improving the state of the world by engaging business, political, academic, and other leaders of society to shape global, regional, and industry agendas". It is a membership-based organization, and membership is made up of the world's largest corporations.
The WEF hosts an annual meeting at the end of January in Davos, a mountain resort in Graubünden, in the eastern Alps region of Switzerland. The meeting brings together some 3,000 business leaders, international political leaders, economists, celebrities and journalists for up to five days to discuss global issues, across 500 public and private sessions.
The WEF was founded in 1971 by Klaus Schwab, a business professor at the University of Geneva.[5] First named the European Management Forum, it changed its name to the World Economic Forum in 1987 and sought to broaden its vision to include providing a platform for resolving international conflicts.
In the summer of 1971, Schwab invited 444 executives from Western European firms to the first European Management Symposium held in the Davos Congress Centre under the patronage of the European Commission and European industrial associations, where Schwab sought to introduce European firms to American management practices. He then founded the WEF as a nonprofit organization based in Geneva and drew European business leaders to Davos for the annual meetings each January.
Our interactive timeline captures key events from Fifty years of Forum history:
http://www3.weforum.org/docs/WEF_A_Partner_in_Shaping_History.pdf - 3003 Bern, 3 March 1971
Decree by the Federal Department of the Interior concerning the supervision of the
Foundation “EUROPEAN MANAGEMENT FORUM”
According to the official Document dated 29 January 1971 and the entry into the Trade Register of the Canton Graubünden of 8 February 1971 (published in the Swiss Trade Bulletin N° 42 of 20 February 1971, p. 410), a Foundation by the name of “EUROPEAN MANAGEMENT FORUM”, headquartered in Chur
https://en.wikipedia.org/wiki/World_Economic_Forum - https://www.weforum.org/about/history
https://www.weforum.org/events/world-economic-forum-annual-meeting-2020/sessions/celebration-of-the-50th-anniversary

1971 - Ancient Persia resurrected * Persepolis * Shah of Iran "King of Kings"
In Persepolis, near the tomb of Cyrus I, the Shah planned to celebrate the 2500th anniversary of the founding of the Persian Empire, for three days, from 12 to 14 October, 1971. It would be “the biggest party on earth”, announced the Shah.
... we served one of the world’s most superb red wines, a magnum Château Lafite Rothschild, vintage 1945.
The most expensive party ever - Martin Beglinger
In October 1971 the Shah of Persia flew in eighteen tons of food to celebrate his country’s 2,500th anniversary and his own glory. Emperors, kings, presidents and sheikhs from all over the world were regaled for three days amidst the ancient ruins of Persepolis.

Shah of Iran - Mohammad Reza Shah took the title Shahanshah ("King of Kings")[4] on 26 October 1967. He was the second and last monarch of the House of Pahlavi. Mohammad Reza Shah Pahlavi held several other titles, including that of Aryamehr ("Light of the Aryans") and Bozorg Arteshtaran ("Commander-in-Chief").
[1st wife of 3] Dilawar Princess Fawzia of Egypt (5 November 1921 – 2 July 2013), a daughter of King Fuad I of Egypt and Nazli Sabri, was a sister of King Farouk I of Egypt. They married on 15 March 1939 in the Abdeen Palace in Cairo.[44]   - https://en.wikipedia.org/wiki/Mohammad_Reza_Pahlavi

How Iran Threw the World's Greatest Party In a Desert - https://youtu.be/6aF0UqC0J48
In 1971, Iran threw an extravagant and exclusive party to commemorate the 2500th anniversary of the Persian empire. The party had a grandeur never seen before in the world's recorded history. It had delicious food from the world's best restaurant, exquisite drinks, luxurious accommodations, medieval European style decorations, and more importantly - the party had the most decorated guestlist - heads of states from 65 different countries, emperors, kings and queens, princes and princesses, sheiks, sultans, and business figures of all kinds from 5 different continents. The venue of the event was not some ancient castle or a seven-star hotel, instead, everything was organized from scratch, in the middle of a desert, by building plastic tents.
The cost of all of this? Not a million dollars; Not a billion dollars; this party almost cost a dynasty. It proved to be a stepping stone for the rise of the Iranian revolution and the fall of the Iranian Monarchy that changed the country forever.

Leviticus 25:13 - ‘In this Year of Jubilee, each of you shall return to his possession.

John 1:23
"He [John the Baptist] said, 'I am a voice of one crying in the wilderness,
'Make straight the way of the Lord.' as Isaiah the prophet said.
Luke 21:27
And then shall they see the Son of man coming in a cloud
with power and great glory.

These are the days of Elijah,


Declaring the word of the Lord


And these are the days of Your servant Moses,


And though these are days of great trial,


Of famine and darkness and sword,


Still, we are the voice in the desert crying


"Prepare ye the way of the Lord!"


Behold He comes riding on the clouds,

In addition to the 50th events,
I've noticed many 100 year markers recently and compiled this study: